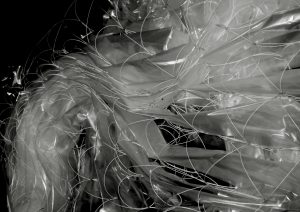 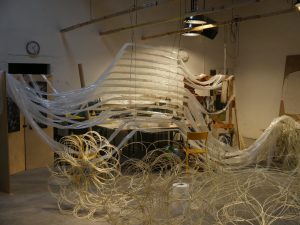 This ongoing project is carrying out the development of interactive systems realizing a concept of reactive experience that is based on the alteration of time-dependent material properties. Devices based on the entanglement of pneumatics and contingent bending-active mechanisms are executing feedback loops of accumulating impacts and handing back this bundled information to the participants through specificly modulated configurations. Within the hybrid system various interfaces are connected to control units that autonomously regulate air draft according to changing arrangements a multi-state array.

In this grid of reversible bifurcation points creeping of pre-stressed fibre composites is causing decisive reinforcement of directional tendencies. Over time this leads to a decreasing level of randomness and to self-referential arrangements. Thus, every participant’s specific involvement is being imprinted to the subsequent behaviour of the device and the way the system performs is converging towards a bundled agglomeration of all previous modulations.

After developing the basic mechanism in 2013 and detecting its time-dependent effects in 2016 the project was first conceptualized in 2017. Experiments are ongoing since 2018, in 2020 it is subject to a 6-month-residency at Cité Internationale des Arts in Paris.

Based on the entanglement of material systems and learning capacities of contingent mechanisms producing user-specific configurations this approach may also be applied to other material systems as well as to different scales and contexts. While the functionalization of time-dependent alteration of material properties is primarily considered as a non-digital contribution to the discourse on the interdependence of body and mind, this approach to representing and processing information gathered from human behaviour also illustrates strategy of accessing tacit dimensions of knowledge through embodied computation.

Due to the wide framework connected to this project a wide range of developments was pursued to incipiently bring up all major lines of development indispensable for the project’s realization.

Within the basic set-up various interfaces are connected to control units that regulate air draft according to intrinsic characteristics of self-assembling bending-active arrays.

Accordingly, starting points include the open exploration of circuit topologies and bending-active kinetics, the entanglement of material systems, sensoric potentials, studies on time-related changes of material properties, cross-disciplinary research on equivalent systematics, integration of site-specific aspects as well as specification and verbalization of the subject /matter.

Open exploration on the potential of bending active dynamics

Design and mechanics of interfaces were not predefined to indicate space for open-experimental examination from which specific functional potentialities could be derived and embedded in an overall configuration.

Other early developments regarding the realization of extremities deal with the exploration of  participatory arrangements of local circuits and interfaces directly intervening with the pneumatic reticulation.

These arrangements are mainly bild out of expired medical products like syringes, respirators, branch switches, ventiles and infusion devices.

While some studies like a self-inflating chair are based on prior developments, others are broadening the topological scope.

The biggest challenge for the realization of the project is the entanglement of these very different material systems, transformable spatial structures built out of linear elements and membranes transporting air draft. Especially the functionality of control units that record, store and reallocate behavioural information is based on this interlocking.

While such an entanglement of  linear and membranous systematics generally zincreases stability, this is not tolerable in this case. Self-assambling arrays must remain transformable to perform the essential tasks.

Thus, the difficulty lies in enabling changing dimensions of surface areas enclosing the air draft. Due to varying alignment of the linear structure membranes are to be stretched during transformation. Various approaches are pursued to meet these demands including specific folding patterns and gathering techniques.

Special attention is being given to detecting the foundations of the device’s ability to reconstitute /reproduce and establish specific formations.

Based on decisive imprinting to the structure’s stability properties this learning capacity could be caused by various factors such as changes of material properties over time or assimilation of the rotational alignment of elements.

The first attempt to clarify this question is addressing the creeping properties of the material by regularly measuring pressure resistance in pre-stressed conditions to examine to which extent these settings are influencing a component’s strain energy.

Although a precision balance was acquired to examine the exact creeping modulus of the used materials, unexpected ambiguities occurred within the initiatory test period. After the first daily measurements pointed out a substantial matching of results and prior assumptions, this clarity became followed by indications to the contrary. It took a while to realize that the measuring arrangement itself was evoking too much noise.

The first test assembly, a clamped 4-point-arrey, turned out to give very imprecise results. Multiple measurements after seemingly identical positioning could vary by as much as 16 %.

A second test object was built topologically reducing the bending-active structure to a single element and minimizing the bending radius while increasing the amount of pre-stress induced to the structure. As a result of this inaccuracy decreased down to about 2,5%.

Also the incorporation of multistable arrangements of steel bands as a second material system with the capacity to perform such decisive changes of its stability properties is (uA) accompanied by test arrangements – to test their creeping properties not only by measuring. pressure resistance at a certain position within the transformation range but also by observing the shifting point of delicate balance.

The intention of exploring the city of Paris to also look for possibilities to incorporate local particularities into the overall configuration was already from the beginning approached within the context of Paris having a long and extensive history regarding pneumatic infrastructures.

Research on the development of the historical pneumatic tube system* was accompanied by taking walks along various sections of its pathways.

This examination did not only lead to integrating the ongoing work on historical maps into this project but also to more profound investigations on the varying methods to transfer information through different kinds of conduit systems.

Besides that, the range of addressing site specific conditions includes country and city specific aspects as well as peculiarities within Cité internationale des arts as well as the particular workspace in which the main operations of the project’s development are taking place.

Due to the aim of avoiding any additional structural interventions to the building some works are directly referring to construction details of the studio located on the attic floor at the annex area of Cité des arts. While traces of former residents such as a small number of nails in the wooden roof beams are being used for spatial arrangements one bending-active object has been applied in such a way that it can gently clasp around those beams.

Regarding the aim of incorporating exhaust air emitted by a multiplicity of sources in urban areas some potential connection points have been found in the surrounding area as well as inside Cité des arts. Especially the entanglement with an air cooled laser cutter of another resident artist is conceptually interesting.

While the usage of wind is being deferred to the occurence of appropriate weather conditions, a fan acquired to sustain the recent heat wave may also be applied to other purposes.

Worth mentioning is also that while addressing one major topic of the city’s contemporary history, some early developments initially emerged from a conceptual engagement referring to strategies of rebuilding the roof structure of Notre Dame.

A number of additional linking aspects happened to play a significant role in the early stage of this intensified development of the project in the course of this residency.

Entering a new artist collaboration with Asareh Akasheh, also resident artist at Cité internationale des arts, introduced a new kind of materiality. Also Akashe’s work on making paper is addressing memory of the body. Accordingly, insights into this process opened up a new field of view which soon became immanent to the structural range of the project.

Integrating various capacities of this fibrous and membranous medium reach out from the entanglement of stabilities to the interrelation of adjustability and humidity as well as the conceptual incorporation of the medium’s vast diversity of permeability and perforation properties.

Within cross-sectoral investigations for the setup to be informed by related fields, special emphasis is, as usual, given to structures observed in molecular and cellular biology. Regarding this project the perspective happened to be particularly directed towards the relevance and functionality of microtubules. Those arrangements, supposingly operating as “brain of the cell” may show distinct similarities to the tubular-based contingencies generated in the course of the project.

Some examinations are concerned with literature on embodied, physical and topology-based computation, others are referring to discussions with persons having profound expertise in cognition science and information technology.

This project’s constitution is bridging various fields so the question of finding ways of articulation and developing a proper language is crucial. Terms are steadily being acquired and derived from the occurring transfer of methods and structural seizablility.

This aim of formalization is no central objective but has great importance regarding the project’s communicability. Hence, it bears the potential for decreasing linguistic barriers and widening perspectives from all sides.

It refers not only to verbalization of concepts but also to the descriptiveness of structural implementation like designation of points on a grid, the numerification of processes or the mapping of stability landscapes.

Hereby, this bridging of the analogue and the digital may help to establish a more holistic approach to processing information.